The Great Glen Paddle passes through breathtaking scenery, incredible landscapes and very challenging conditions. Throw in some local myths and legends and you have the recipe for one of the world’s greatest endurance paddles.

The 57-mile journey takes you through the stunning Caledonia Canal, three open water Lochs including the mighty Loch Ness, and on to the east coast of Scotland. Weather plays a huge part, with preparations for all conditions being vital. For some the Great Glen Paddle would be the biggest test they have faced.

Preparations
Our journey began back in mid-2013 when many were still in short distance race mode; paddling in summer. Preparing for what could be a warm or cold event meant training would be vital.

The distance itself in good conditions is easily achievable in one day, but throw in limiting time factors and the sometimes extreme conditions and it’s a whole new ball game.

We all wanted to train in a variety of conditions to prepare for what could be a fourteen-hour plus day. But one of the wildest winters made getting out tricky.

As days raced by we began to see improvements in the weather – the Great Glen Paddle was less than a month away. For some it was still pounding out the miles, testing kit and trying new ideas, while others had to rest injuries picked up through training. What we did know by this point was it was likely to be cold – reflected in the amount of kit being gathered together.

Now or never
With the start time scheduled for early on Saturday morning everyone in our group made their way up to Scotland for Friday afternoon. Final preparations began as soon as the hot tub and sauna was switched on showing we had our priorities in the right order!

As we arrived into Fort William the snow had eased but the night was cold and paddlers where raring to go. It was soon apparent why as you quickly become chilly. Despite the temperature and lack of visibility there was a really good feeling.

A good start
Starting out in the dark is quite a strange feeling. When you can just about make out the route in front of you and catch a glimpse of someone up ahead, distances become hard to judge.

During my run up to the event I had been training with Crispin Jones down in Devon. We quite often end up competing together during races and have a great respect for each other, so to paddle with him on this challenge I knew would be good for both of us. We had a plan to stick together and push ourselves for a good time. Having someone with such a bright torch strapped to their board, lighting up the whole valley, was also very useful.

It was soon apparent that our pace was quite high, we planned to make use of the flat calm conditions before the sun rose and our first stop would be in sight.

Approaching our first big test at Loch Lochy the wind began to come through, a hint of snow hung in the air and the temperature dropped. Winding along the canal Rob Stewart passed us at a blistering pace. We knew it was a long way ahead yet and decided to stick to our plan, and soon enough we reached our first portage.

A steep climb up a slippery snow covered bank awaited us – wetsuit boots and a heavy board meant for a tricky assent up to the pathway. After helping each other it was a five hundred meter walk to our entry point the other side. I found out quickly that having to carry a dry bag with spare clothes wasn’t the best idea. I had chosen to paddle in lighter gear as I knew how warm paddling makes you, most others had full dry suits on and didn’t require spare clothes.

To keep us feeling sharp and focused we would do mini mind challenges on the way. Our plan was working well and we were in good spirits. But sure enough the snow started to fall heavy and the cold tail winds kicked in as forecast. The difficult part was knowing which way to go. We chose to stick to the right hand bank as we pressed on downwind.

Monster?
Thoughts of the Nessy legend caused alarm at one point when I heard splashing noises from behind. Glancing back nothing was there so I concluded it was just the wind pushing the water. It turned out that Mark Slater had gone all stealthy on us with no lights on his board. He had been creeping up making good time downwind. Mild panic over!

Loch Lochy was a challenge. Mark was much more suited to the downwind conditions we experienced. He started to put a little gap between us. About a hundred meters ahead he ran into trouble. At first we thought we heard him shout: ‘I’m drowning’. Spotting he was off his board we entered rescue mode. Fortunately he was OK, Mark had simply run aground. As we picked the pace back up the wind really got going and we ended up catching a few bumps.

Tough stuff
My run up to the Great Glen wasn’t a smooth one with injury and a lack of training. Despite this I was paddling well and confident of setting a good time. As we approached the halfway point I was ready for some food and drink.

I was falling back though and I just couldn’t stick with the pace. When your mind is telling you to speed up and your body physically cannot respond it’s a very strange feeling.

Reaching the halfway check point I was barely moving and getting slower. Fortunately it was just starting to get light and I could now make out the end of Loch Lochy ahead. 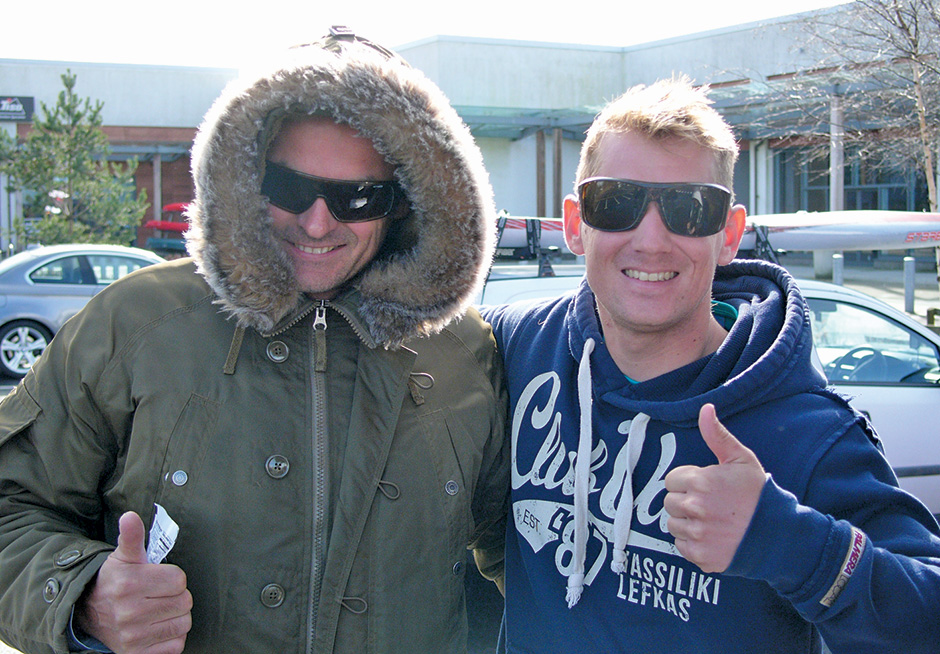 Hitting the wall
Still being some distance away I decided to slow down and just get to the rest point. As I began to grind out the last few kilometres it was evident I was suffering more than I thought – leg cramps, lower back pain, stiff shoulders and no flexibility.

Part of downwind paddling is going with the flow, linking sections and working the board. I knew I was in trouble as I was unable to move around and was stumbling – virtually unable to paddle. The next few minutes were the longest of the whole trip.

A kilometre out I was caught by a couple of kayakers. We had a little chat about how bad the weather was – a nice little pickup just when needed. As I entered the flat calm lagoon I tried to rest and sit on my board but my legs cramped so it was back to it. I held onto a slither of hope I could carry on, but all this changed when I discovered I couldn’t paddle.

My shoulders and back began to seize up completely when I finally reached the pontoon. Ready to greet me was Simon in our support crew and I think he knew instantly something was amiss. It was time to call it a day, get warm and dry and be thankful I had avoided serious trouble.

Having managed a third of the entire distance I was pleased but bitterly disappointed at the same time. With food and warmth back into me a few other paddlers came through, all agreeing how hard Loch Lochy had been. It was great to see everyone supporting each other. My role had changed and it was time to pass on encouragement to those still on the water.

Summing up
Mark Slater powered home taking first place and coming in before many of the kayakers. Jo Hamilton-Vale paddled strong through tough conditions, becoming the first lady to complete the challenge. Our team was amazing and my thanks for making it a special trip. Ali and Mark for being the heart of the team, Pete and Simon for their help when I needed it most, Sally for bundling me into a warm van and keeping me supplied with sweets, Nick for pushing on to support Rob single handed – thanks! And of course Mark, Rob, Crispin, Adam S, Adam C, Jo, John and Russell for completing such an epic challenge; my hat off to you all. 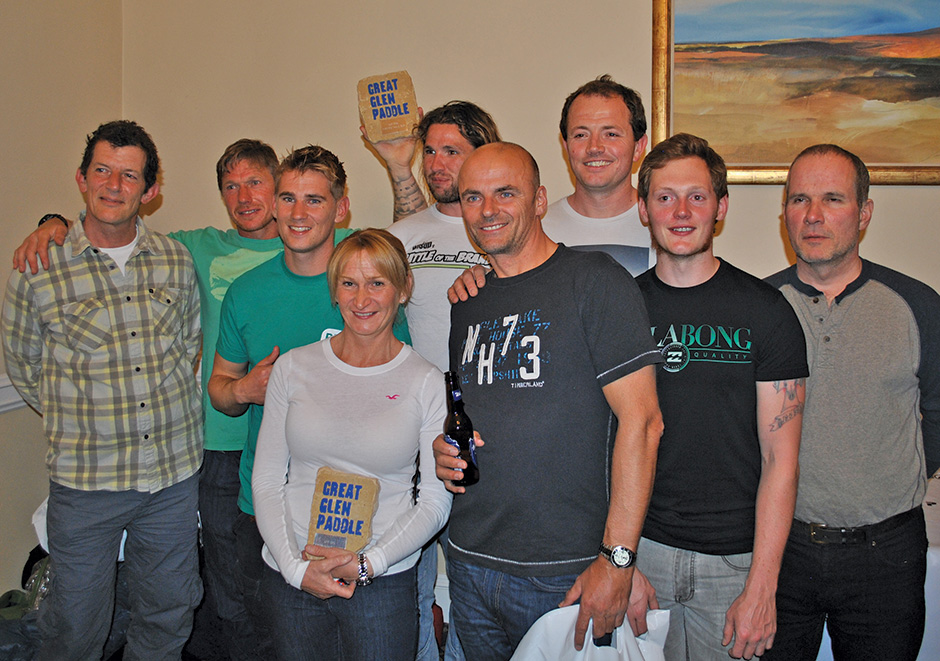 For me it’s UK race season so time to train once I’ve recovered! The Great Glen had the best of several people that day. It’s nice to be humbled by Mother Nature and remembering why you paddle; to enjoy the feeling of gliding over the water, part of good company and exploring new places.

Scott Warren works for Starboard SUP UK/Red Paddle Co and is a regular fixture on the UK SUP scene.