The Jurassic Coast lies on the south of England. It is one of the most famous and ancient bits of coastline on the whole planet. It is also home to some of the best surf reefs in the UK, not to mention miles and miles of remote shoreline with private beaches only accessible from the water. It has amazing features such as Durdle Door, Bat Hole, Lulworth Cove and Kimmeridge Bay. For the more adventurous there are tidal races and over falls, but these should be treated as the death traps they can be!

The ideal place for some SUP expedition then? Yes! As long as you make some plans and are aware of the possible hazards – strong tidal flow, tricky access, few escape points and lack of phone signal. Then there is the sea itself, which can drop a thick fog within seconds!

As usual our trip was a last minute decision, basically being dictated to by the weather/sea gods. After a quick call to Stephen Hale (aka Stuttieboy), we were loading up the paddle wagon or the ‘Beach Hut on Wheels’ as it’s more commonly known. We knew a great ‘stealth camper’ spot not far from our desired put in, so we headed there hoping that we could get parked at our desired place. We did…

Next morning, we didn’t need to rush as our tidal window allowed a few hours to have breakfast, coffee and chill until about 11am. We then hitched a ride with the tidal conveyer belt. Our put in was at Kimmeridge Bay, where we would catch a 1knot flow after paddling about a kilometer or so to the outermost point at KBay: Broad Bench. 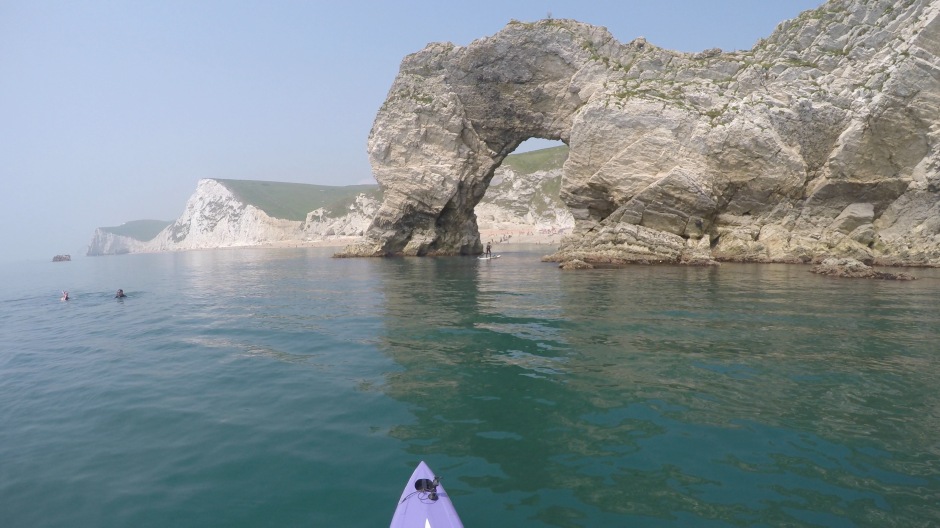 As we rounded the infamous Bench we saw a couple of sit-on-top kayaks with children on board. The father asked me if the next point we could see was Durdle Door. He seemed shocked when I told him it was at least another five miles away! I also told him that he would be fighting the tide all the way back too, otherwise they’d waiting for six hours. He didn’t even realise he was in a tidal stream, with his whole family. At that point they turned back. To be honest – he and his family would most likely have been OK but it just highlights the possible dangers lurking for the unaware.

After Broad Bench the main thing that dominates the whole stretch of coast is Gad Cliff, towering 150 meters out of the sea for the next two kilometers. You can really feel the ancient vibe along this stretch, but the buzz of motor boats gets more frequent as soon as you get close to Lulworth Cove.

Lulworth Cove itself is really not that impressive from the sea. It sort of creeps up on you and just appears to be a small gap in the cliffs either side. This is where things start getting busy, with weekend warriors zooming around on various forms of internal combustion craft. Then you’ve got the tourist boats taking customers on a joy ride to see Durdle Door. They are high speed RIBs and they come close throwing off huge wake, so be ready for some fun.

Arriving at the Door itself, there had to be at least 500 people on the beach just inside the huge natural arch. You can see why. It’s an impressive sight, a freeze frame in time as the rocks stand there showing their ancient past in their curves and fault lines. Another kilometer or so at the other end of the beach there is a fantastic tunnel through the headland, Bat Hole. That’s as far as we paddled and after a long coffee break, we headed back. Against the tide at first but it wouldn’t be long until the flow was in our favour. 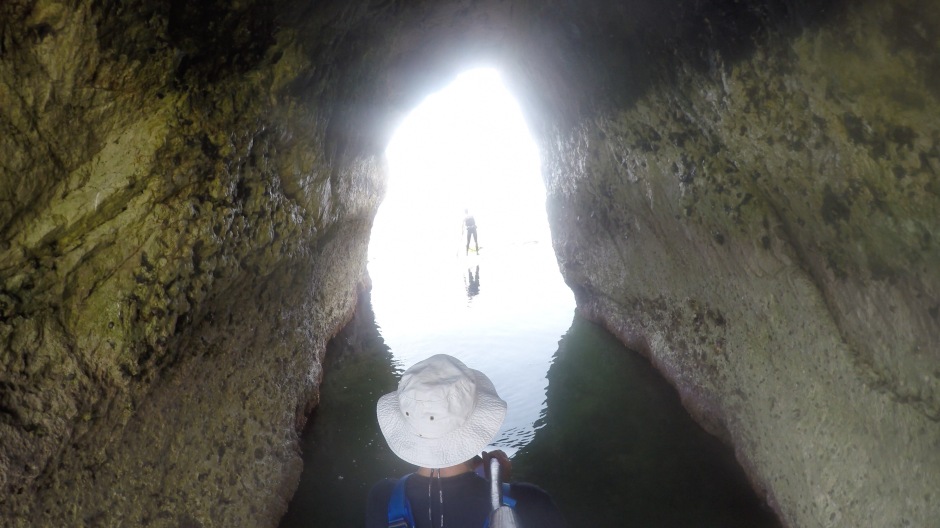 Soon though the tide was the least of our worries. As we passed Durdle Door, a thick fog dropped and engulfed us within minutes. Visibility was down to about 50 meters. The joyride boats were now crawling along sounding fog horns. We had to hug the shore very tightly all the way back. It was seriously disorientating. We couldn’t see a thing and just had to trust that as long as the shore line was on our left, we were heading the right way.

Within a couple of hours the fog slowly started to lift, giving amazing views through the haze towards Broad Bench and Kimmeridege. The Bench was now showing a small tidal race on the flood, which added some fun to finish our trip.

It’s always a great site seeing the van in the distance on the last leg of a long paddle. The evening sun was throwing stunning light into the bay. The short but lovely last leg of our adventure into Kimmeridge was across crystal clear waters and wildlife encrusted rocks – it really is an amazing place.

For those who fancy the same paddle the whole trip is roughly 26 kilometers but could easily be broken down into smaller chunks if you have less time. Be aware of the tidal flow and get up to date weather forecasts before you leave. Remember to let somebody know your journey plan and approximate finishing time and always go as a group. Safety first and all that…