For many it’s the carve gybe firmly cited as the goal move. And while it’s certainly worthwhile learning (and functional to boot) the forward loop remains the true rockstar windsurfing manoeuvre that you can aim for while learning to go round corners – after all diversity does break the monotony. Windsurfing UK’s editor, Tez Plavenieks, dissects learning to forward loop and discusses some of the things that helped him stomp (arguably) the move of moves. Hopefully these insights will help others on the same path. 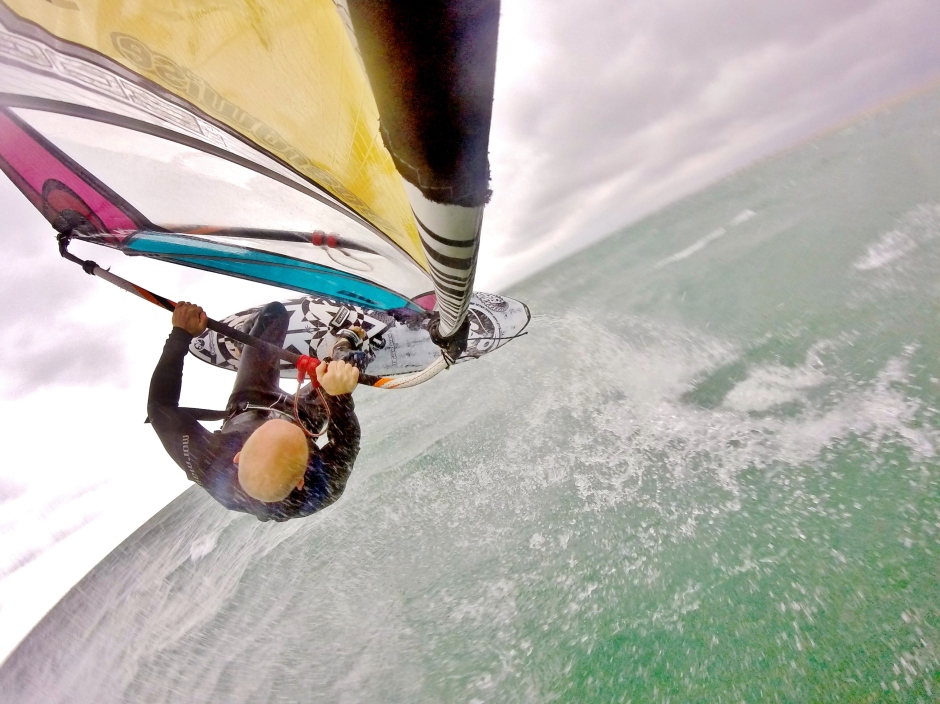 Forwards were always a goal of mine. And although I’ve been doing them for a number of years there’s always a variation on the theme (depending on conditions/location) and I’m constantly trying to refine my technique – make them higher, stall them and so on. For me it’s a key stunt and one which will spice up your sailing no end. They’re super fun as well.

Everyone you ever speak with (who can loop) will tell you the forward is easy. And while on some levels this is true that comment should be taken with a pinch of salt. Windsurfing is technical and there’s a degree of trial and error involved in all stages of learning – it’s the same with the forward. So yes, it’s easier, generally speaking, but it still requires a level of understanding and there’s definitely technique to learn.

That said, compared to some of the new school power freestyle moves, learning to loop is much quicker – it can (in theory) be nailed down without ever going near a carve gybe. If you can plane comfortably in the straps, can waterstart, sail smaller boards around 100L of volume and chop hop then you’re good to go. All you then need to do is find ya bottle and whip it!

Another common thing you’ll hear when referring to the forward loop is: ‘it’s just a controlled catapult’. This isn’t technically true. A catapult will throw you towards the board’s nose, the sailor in question having zero control over their kit. A well-executed forward loop meanwhile is when the rider remains at the centre of the move, rig and board rotating around him/her – the fulcrum point if you will – CONTROL being the focus.

Having found the courage to pull the trigger there’s often a tendency to fling bodies off the next available ramp in full power catapult style. Launching from a mast high wave this might result in a spectacular looking end over end loop (or a huge crash). Off a small piece of chop, however, you’re definitely just going to splat spectacularly. So rather than think of the forward as a controlled catapult consider it a sideways roll, using the sail’s power to whip you round. There may be a degree of inverted contortionism, but this should only be for a split second. The loop to learn when starting off is definitely the non-upside version (as much as possible!).

On the flip some riders don’t commit enough, maybe letting go and trying to bail having initiated a forward. This isn’t a good idea as it’s when you’re more likely to spank yourself. If you’ve built up enough courage to go for a forward then commit fully. Having sheeted in you’ve gone past the point of no return. Flow with it and who knows, perhaps you fly round. At the very least you hit the water and not your kit.

There are many variations on the forward loop theme – endo (as already discussed), stalled forward (done when sailor’s hit altitude), flat water forwards (arguably the most technical kind) and forwards performed when launching off small ramps. It’s the latter to aim for.

In terms of kit a 100L (or so depending on rider weight), 5.3m – 4.7m sails, steady sideshore wind (in relation to chop/waves) and knee high (ish) waves/chop will deliver least scary conditions. If the wind’s more side on forward looping becomes slightly harder. Consider the forecast and location prior to hitting the beach. There’s usually an optimum somewhere close by.

So, you’ve talked yourself into chucking your first loop (or you’ve been pressured into it by your mates) meaning it’s now or never. Having read (in depth) all the forward loop technique articles there are a few things that helped me nail the move. The following might not necessarily be the correct method for teaching but these tips aided my progression. Obviously what works for one might not work for another. However…

Being powered up is better than being under powered. Slightly over powered helps get a quick rotation off flatter water. I’m not suggesting rig a 6m in a hurricane but you definitely need speed and a sail full of wind. Under powered looping, while seemingly safer, results in more crashes and not enough oomph to your rotation.

Many will tell you to bear off slightly before hitting your chosen ramp. If you need some more speed then this may help. Just don’t buzz off too downwind as eventually you’ll run out of steam. And likewise don’t head miles out to sea before going for it. Best course of action is to get involved shortly after your first (short) run. That way you’ll be over those initial jitters quicker.

Hands! The biggest thing I learned during forward loop drills is moving BOTH hands down the boom. The back hand sliding towards the clew will certainly help when sheeting in, to initiate the rotation, but moving my front hand to just ahead of harness lines allows the rig to be chucked further to windward. It helps forgive dodgy technique during those initial attempts.

The head! You’ll be told to look over your back shoulder as you sheet in. While this certainly works for some I found looking UNDER my trailing arm delivered better results. Looking under your armpit forces that front hand to windward and the back leg has to tuck up. If you don’t do all these things simultaneously then you won’t have an unrestricted view behind you. Ultimately you won’t rotate – if you can see daylight (and not a neoprene clad arm) then you probably will.

Sheeting in hard is a winner. The harder the better. Just remember to open your sail towards the end of the move or you’ll end up going into a double (this may take a number of attempts before spatial awareness kicks in and you know where you are during the move). As you feel the board’s tail hit the water throw the mast up and towards the nose of your board. Chances are you will have hit the brine with your backside or lower back. Throwing the rig aggressively to the nose will see you pulled out of the water and able to finish off the forward – the last part of a waterstart if you will.

After a few attempts your success rate should start improving. That said don’t expect 100% for a while (unless you’re particularly talented, have access to regular idyllic conditions or are a lucky bugger).

Unfortunately the UK’s fickle climate and inconsistent wind patterns ensure opportunities to learn (repeat) aren’t as regular as you’d want. Likewise you’ll have good and bad days on the water. Sometimes you’ll feel progress isn’t forthcoming while at other stages massive leaps will be made. Be prepared to take a few stacks and you’ll eventually get there.

Move BOTH hands back along boom – front hand just in front or on harness tab.

Pop and slice the rig to windward, sheeting in hard – looking UNDER trailing arm could help with this as it did me.

Open sail as tail touches down and throw rig towards nose of board.

Hopefully this article has given you some inspiration. As we head into proper windy season here in the UK there should be enough opportunity to try the forward loop. Just remember to have fun, commit and don’t let go! (Then it’s time for backies, but we’ll leave that for another time…).