This adventure had been a long time in the planning. I had met my expedition buddy, Cody White, an American paddle board racer on one of previous trips, the Spare Seat, from Niagara Falls to the Statue of Liberty in 2012 (www.thespareseat.com). Our original plan was to try and circumnavigate the island by paddle board. This would involve travelling extremely light with just one change of clothes and paddling kit, which coined the phrase, “How short is your toothbrush?” 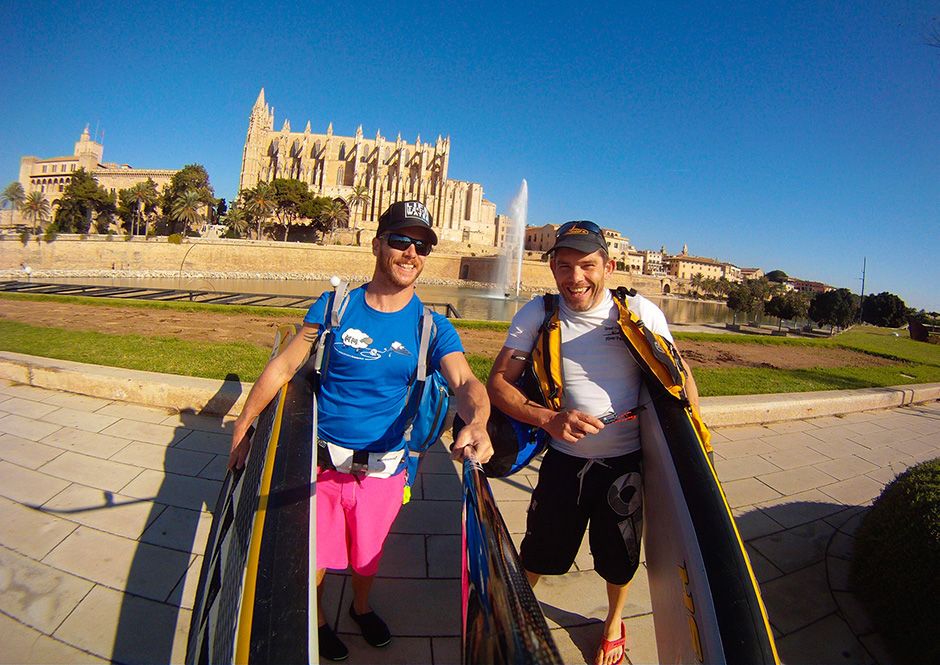 Our plan seemed foolproof scheming from opposite sides of the Atlantic, paddle around Mallorca, wild camping along the coastline. December was the window of opportunity and we gave it the green light. We arrived excited at the prospect of warmer weather to find the worst storms forecast in 10 years. We wandered around Palma, looking a bit of a sight, carrying everything including our inflatable Naish One Paddle Boards, chosen for their speed and weight, food and small stove, a tarp and our sleeping bags. The storms meant cold ambient temperature, so evenings were looking a bit on the chilly side. We stashed our spare kit at the hotel we had booked for the first night and prepared for the off.

With bad weather due we reviewed the wind and wave forecast and concluded our best option given confused conditions was to run with it at the start and take our chances. We headed anti clockwise to pick up the following seas and breeze towards the Southern Cape. Leaving Palma felt good and we were pushed along on two-foot swells – the sun was shining and we were in good spirits. It took a while to adjust to the boards with extra kit and nose weight, we were using Riveria Vantage Carbon paddles for the trip which had the right blend of weight and power. Almost from the start we began to appreciate how stunning the coastline of Mallorca really was with sandstone, rocky outcrops and what we called, “A monopoly of cool caves”.

Eating couscous and tinned fish
Researching the trip we had discovered that general camping was frowned upon, presumably to avoid the large tourist trade descending on the beaches in summer. Funnily enough in winter, we seemed to have the place to ourselves and apparently seeking ‘shelter’ for the night was allowed. Our first campsite involved nestling our sleeping bags onto a sandstone ledge with a small cave. It was perfect and we reviewed the day whilst eating couscous and tinned fish. As darkness fell we spotted some fishermen in the bay so lights out for us to avoid any hassles.

Bad weather approaching
The night was cold and morning was a struggle to get going. Once paddling we again found lots of interesting caves and gullies to explore. As the sun climbed in the sky it took the edge off and we got into our stride. Cody, who races in America and runs Nomadic SUP in Key West, began to give me a few coaching tips on using my power better on a SUP. As dusk fell we scouted our second campsite spot just short of Colonia Sant Jordi – it was a 10m wide letter box cut in the cliff and with a bit of scrambling we were checked in to the second best camp spot. More food and our spirits were high but we knew bad weather was approaching fast for the next few days. To make matters worse my camp mat sprung a leak overnight and I took to sleeping on the Naish One.

The weather didn’t disappoint, and we awoke to grey skies and light rain. We stopped for lunch at an old boathouse at S’Estanyol De Migjorn but as we got back on the water, it deteriorated quickly and we were faced with swell and waves over a metre and strong gusts. I had two dismounts surfing down some waves but fortunately the water was still warm. Suffice as to say we got a bit trashed and eventually were literally brought to our knees but we made land after crossing about 10km of open water in the bay. Touching land was a welcome relief and we were greeted by a German tourist who had been tracking us with binoculars and wanted to check we were OK. Thanks buddy.

We scouted a beach that was out of the way and 3km out of town for a campsite. This time a tarp and two paddle boards as sides, was our makeshift bedroom. We stashed our kit and wandered into town for some food and to charge electrical kit and find an internet connection. Cold was becoming an unpleasant factor simply since we had packed so light, therefore we gratefully enjoyed the warmth of the café and some hot food. Eventually we beat a retreat in the rain to our shelter and spent the night shivering in a heavy storm.

Morning greeted us with more sunshine but really strong winds and waves made SUPing round the cape at Cap de ses Salines a real problem. We could see white caps and big waves from our beach location and decided to scout it. Before we went we hung our wet kit onto a local tree aka ‘The drying tree’ and walked the 6km to the cape. Everywhere was jagged razor sharp rock which was getting battered by big waves and white caps (that day was 30-knot winds and 2.5-metre swell) with a southerly wind. Our concern was getting blown south into the Med with no easy get out on the rocks if it all went wrong. We were stranded and returned to our camp deciding to wait for a better window.

The next day the wind dropped slightly and we were still clinging to the idea that we might make it round the island, so we returned to our boards and pushed for the Cape. Rounding it was like getting caught in a huge wind tunnel. We were becoming massive sails being pushed in the wrong direction with strong gusts. We oscillated between kneeling and sitting, gritted our teeth and fought our way north.

This was nothing like the pretty catalogue pictures, it was a pure grind. Slowly we made progress northwards but could feel our original mission slipping from our grasp given our limited window of time. We both agreed our original plan would be tweaked to ‘Exploring Mallorca by SUP’. We were exhausted having battled with the elements for most of the day but one of the highlights was paddling through the natural archway at El Pontas, which providing the obligatory posing shots.

We reached Cala Santanyi and checked into a hostel for a night to use the internet and work out a new plan. We wanted to continue pushing north but the weather was against us for the next 3-4 days with the tail end of the storm. Most places were shut and deserted given the off-season but we did find a local seafood restaurant and figured we were in calorie credit – the local food was amazing and we ate well.

The next morning we continued northwards again mainly on our knees, which felt a little pointless given we were supposed to be stand up paddle boarding. After another morning of being battered we concluded it was time for a change. We reached Porto Colom and conceded, there was no fun to be had fighting the elements.

We did the obvious thing and literally tossed a coin for heading to the North or the West. North won and with the kindly assistance of local Jaume we headed to Cap de Formentor to explore. We met Jaume whilst grabbing a coffee in a local café and he literally came to the rescue with a night in his flat, sampling local food and providing a taxi service to the North – what a legend! He runs Mas Nautica, a chandlery and hire shop in Portopetro, so if you are passing please give him your business. It is amazing how you can travel anywhere in the world on adventures and meet like-minded people.

Jaume drove us north to Port de Pollenca and then into the hills of the North Cape. We scouted a location close to a hotel and ended up having to hide in the bushes to dodge a rent-a-cop. It must have looked a bit suspicious with us diving into the hedge and Jaume left to do the explaining. We made camp again with our minimalist kit and reflected on our good fortune. We had three days to explore Cap de Formentor without fighting the wind! In the morning we pushed off the beach with stunning aquamarine waters, threaded through a small rocky island and started to explore coves and caves galore. It was like being kids again, as we rounded each cove and outcrop and found new places to play.

We were joined by a fair few jelly fish, which added to the incentive to remain on the board. As we pushed north, the wind again picked up but thankfully less than before. We found a quiet bay for lunch and without time pressures of our exploration mission decided to walk to the top of the Cap and see the view. Our camp that night was literally on a grass bank nestled under some trees perfect. We had practiced planking on rocks that day, explored many more caves and really grew to love Mallorca. Next day we headed for the lighthouse on the Cap.

The final day saw us head up to the Cap de Formentor, again with heavier seas and strong winds with the highlight of our day spotting a small gap in the cliff only a foot high that revealed a huge hidden cavern. The colours were simply breathtaking and I loved the fact that if you had been a speedboat you wouldn’t have even seen it – that’s why I choose human powered adventures. We explored around and then headed back south towards our wild campsite for one more night of freedom.

Reaching Port de Pollenca, the weather lashed down again, however, for us towns were a bit of a problem as we simply couldn’t hide away easily and so were forced to spend money we didn’t have. Luckily we met Emma and Simon Brookfield who took pity on us and allowed us to share their apartment overnight. As luck would have it they were heading to Palma the next day and also gave us a lift.

The last few days were incredible with stunning caves offering a kaleidoscope of colours which coined our second description for the trip, “A monopoly of cool caves.” Ultimately with the weather our original goal to circumnavigate the island in the time we gave ourselves was simply not possible but it did remind us that just exploring for the sake of exploring is so much better. Hopefully we will return to Mallorca at some point.

Cody lives in Key West and runs Nomadic SUP, a stand up paddle board eco-tour business and takes part in SUP racing in the States. Nomadic SUP specializes in Eco Tours which offer professional instruction that ensures new and experienced paddlers will safely be able to enjoy the sport of SUP in the pristine eco systems surrounding Key West. http://www.nomadicsup.com

Richard is a human powered adventurer and inspirational speaker who has completed many iconic adventures http://www.richadventure.com. He runs a canoe, kayak and SUP company with his wife just one hour north of London called http://www.canoetrail.co.uk . They provide adventurous activities and paddlesports for companies and groups and have a wild campsite that is accessible by canoe or kayak. He also co founded social enterprise http://www.inspiredlife.org which has inspired over 26,000 young people and communities. 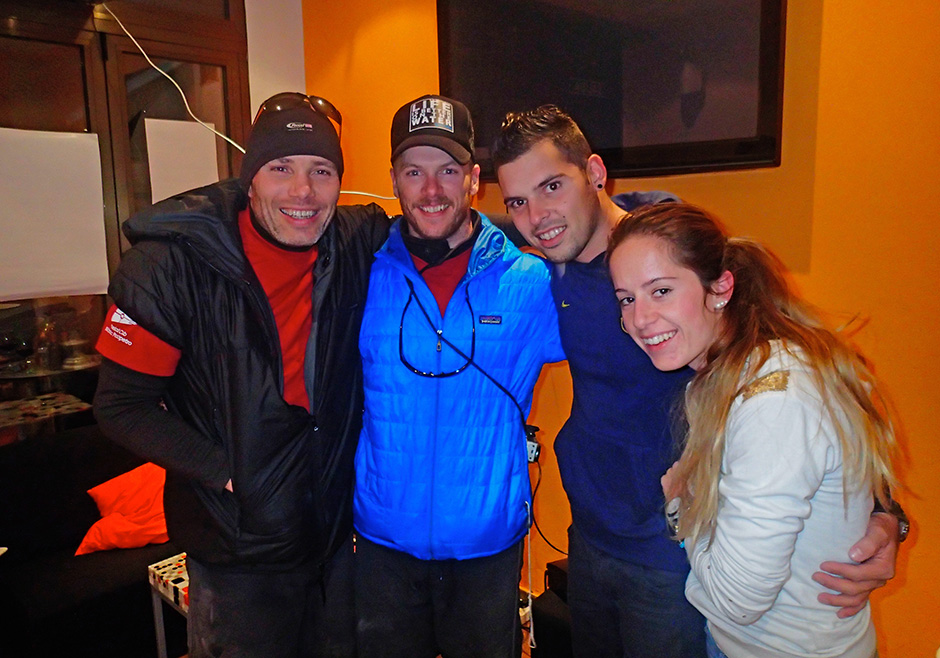 Richard and Cody with the bar owners