Having reviewed the FCS II Touring 9.0 fin previously we were positively buzzing when SUP North’s Alan Taylor (UK stockist) suggested we give the Danny Ching signature model a spin. What? Check out one of the world’s best paddlers’ fins manufactured by arguably the world’s most recognisable fin company? Er, yes, sign us up!

When the DC landed the first thing that struck home was how light it is. Sure we’ve used our fair share of high end race skegs but nothing comes close to the FCS for weight (that we’ve tried). Manufactured from carbon it looks the bomb with vivid orange livery and the brand’s ‘snap and lock’ attachment system standing proud. We won’t bang on about how good this is, as that was covered in the last report. Suffice to say the FCS II system will revolutionise your fin changes and swap outs – try it experience it.

So back to the actual performance of the fin and once snapped into its box the Danny Ching 9.0 looks ready and willing for action. As we’ve already said the fin’s lightweight is commendable and it barely registers on the overall of your race SUP. (We’ve mentioned in previous articles that if you’re striving for podium race finishes then having the correct tools for the job are key and fins are no different).

It stands to reason that something so feathery will only help and not hinder. There’s certainly no drag from added weight extending from your fin box and the wide base gives enough stability to keep intermediate and experienced paddlers alike upright. The only thing we’ll say is that it’s delicate – due care and attention will be needed as it will chip easily. 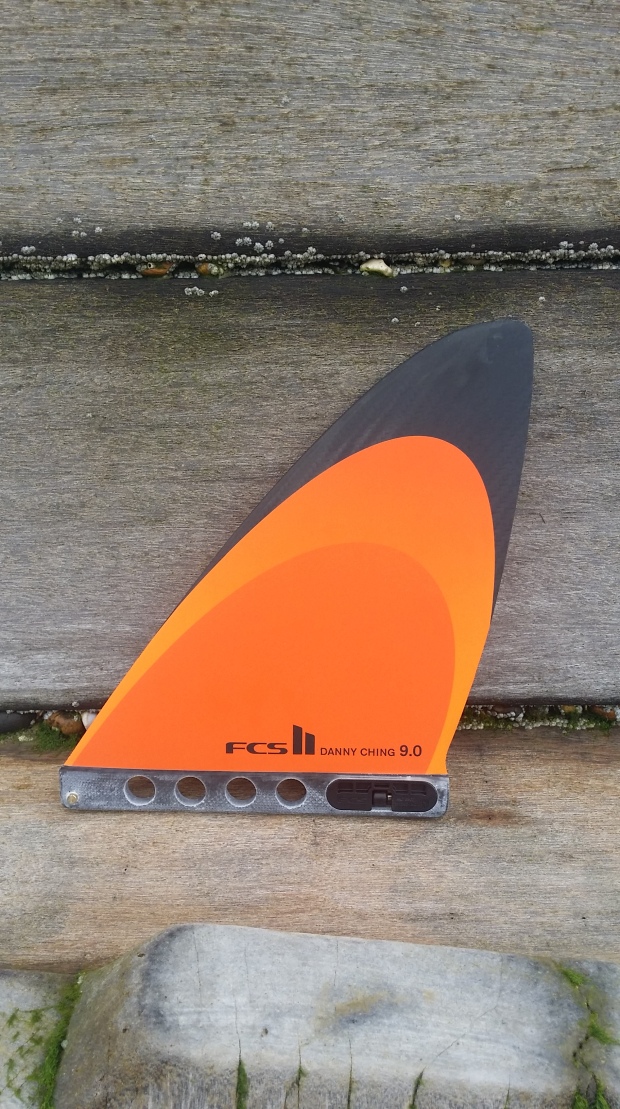 Although Mr Ching uses the fin across various race environments we found it really suits shorter sprint type races. For distance and ultra-distance a longer skeg may help further with tracking. If you’re needing to fang round multiple buoy turns then DC’s signature FCS is a pure thoroughbred. It releases at just the optimum moment and allows smooth transitions from one direction to the next. As such we couldn’t fault it for rapid racing.

A beautifully looking and feeling product the FCS II Danny Ching signature race fin isn’t simply aesthetics alone. If you’re serious about racing – especially shorter distances – it’s certainly worthy of inclusion in your kit box. Tracking well for a stubby foil it also provided enough stability for dynamic buoy turns without losing any of its edge. FCS’ snap and lock system is simply amazing and this alone will change how paddlers view fins. The only thing we did spot with the DC fin is how fragile it can be. Knocks and scrapes – especially from shingly beaches or rough ground – will take their toll. Treat it with care and it’ll serve you right.