This the second ‘red rail’ board from Aqua Inc we’ve tested. We checked out the brand’s Kala 9’2 a few seasons ago to much success. The 8’2 x 28.5” x 110L 4 Queens version is the next model down and in terms of dimensions quite a jump. For many paddlers the lower volume and narrower width may be a turn off, but there’s more to this board that you’d first think…

Firstly there’s a considerable amount of nose rocker which suggests performance erring towards the aggressive side of SUP surfing. Pan back, however, and you notice a fairly thick tail, which although rounded off, hasn’t been done in such an extreme manner. In some cases stability is directly affected by a board’s tail shape. So how would the 4Q feel on the water? 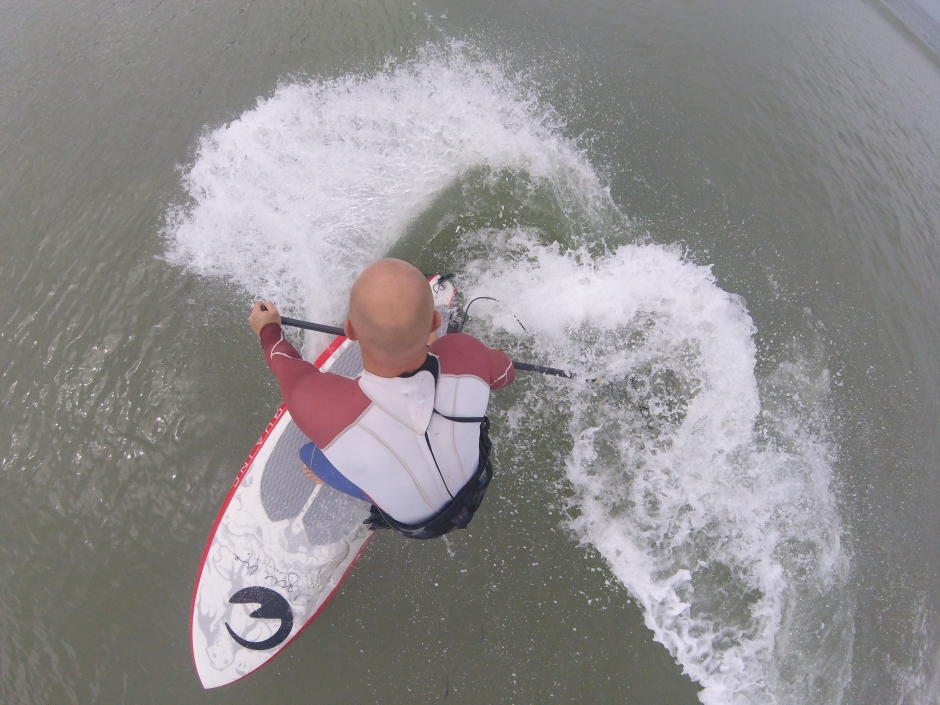 There’s no doubt Aqua’s 8’2 is lively. From the off you can feel it’s a SUP that wants to move. As suspected, however, the 28.5” width is offset by the wider/thicker tail. As such many progressing paddlers wouldn’t find it not too difficult to pilot – especially across calm waters. OK, there may be the odd spill but it’s not as extreme a shape as you’d initially believe.

Due to the board’s nose rocker riders will need to hammer down a tad to get it zooming in a straight line. The benefits of such a front section being it climbs white water without hassle. If paddlers need to step back when hurdling flotsam then that chunkier tail does help.

Once at the take off it’s then a case of picking your wave. We found needing to stand quite far forwards helps when dropping in. As such waxing the front section would be a good idea. Once on a wave, however, it’s simply a process of stepping back into surf stance.

Rail to rail Aqua Inc’s 4 Queens is super smooth through transitions, that wider tail and proactive riding helping generate all important speed. With eyes on the prize setting up for a lip belt or hack is initiative. And again, to keep banging on about it, the tail provides a form of ‘get out of jail’, doesn’t bog and forgives less than efficient footwork. Instead paddlers will find their move of choices is completed more often than not.

Aqua Inc’s 4 Queens 8’2 is certainly a performance surf SUP but not a sled that’ll alienate. In fact, it’s more forgiving than you’d initially think with a pronounced nose rocker helping when aiming for the peak, dropping into waves before the board’s tail gives riders the opportunity to hone their carving craft. You could describe it as being almost like two boards in one with the best of a super performance short board being combined with a user friendly shape. In both quad and thruster form we had a blast and it’s not bad price either.