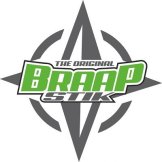 Looking more like a Paralympic sprinter’s prosthetic limb Zenxten Inc’s Braap Stik‘s land paddle weapon is a very distinct and completely ‘out of the box’ product. For most of land paddling’s short life paddlers have utilised wooden sweepers. There have been a few exceptions to this rule, such as Sk8pole’s adjustable, Kahuna Creations’ aluminium offerings and various bespoke and homemade types. Mostly though, for purchased land paddles, it’s wood that’s been favourable.

As with watery SUP land paddling is as much about the ‘engine’ you choose to power your sled as the sled itself. There are lots of unknowns surrounding land paddle paddles but with the Braap Stik you’re definitely going to be experiencing something a little different to the norm.

Utilising a double push pin extension system Zenxten Inc’s Braap Stik is an adjustable land paddle making it applicable to a wide range of rider sizes and styles. With an ergonomic ball grip handle getting the correct length is super easy. A degree of maintenance will be needed to keep the push pins grime free, however. The last thing riders need is the mechanism jamming.

The ‘blade’ section of the Braap Stik is the most interesting area. As we said in the intro it looks more like a performance sprinting prosthetic. A curved fibreglass arm, pre-loaded with spring, tips out with a flat rubberised head. Double bolted for security the tip’s shape boosts a rounded trailing edge that should roll freely through each paddle stroke.

Braap Stik themselves call the blade a spring – it’s not hard to see why when actually paddling. The brand offer three different types – heavy, medium and light. We were using the medium for this test (although we did have the light as an alternative). Fitting to rider size and style should be easy enough but if in doubt it’s best to speak with UK Braap Stik importer Gary Evans of Land Paddle UK fame.

With stand up paddle boarding the amount of shaft flex dictates the type of feel and performance you’ll be getting on the water. It’s important to get this right – so saving your muscles/joints from unnecessary wear and tear and also achieving higher performance levels.

For land paddling it’s exactly the same although historically flex, and pinning down what each brand and model offers (and what you need), is notoriously hard. So much so that most riders probably won’t even give it a second though – possibly not even a first. Yet land paddling arguably delivers more impact stress to the rider – after all it’s hard surfaces you’ll be clattering. Using something that’s suited to your riding, ability and style is therefore super important.

Braap Stik’s differing paddle flex properties are welcome. The paddle being used in this review is super powerful. When planting the Braap to ‘catch’ you can feel the spring load up. Through the ‘pull’ part of the stroke its power begins to unwind and momentum is generated. As you ‘recover’ the paddle riders are sent hurtling forwards at a rate of knots, with a little extra kick being delivered to further aid propulsion once released from contact with Terra Firma.

Requiring less effort than conventional land paddle paddles we were able to cover much more ground compared to normal. The efficiency of the Braap Stik is tangible. You can feel its stored up energy as you cruise along – so much so it almost feels like cheating.

And here’s the rub. For general recreational land paddle touring and covering distance the Braap Stik is the least tiring land paddle we’ve ever used. It really delivers the goods in terms of chewing up the miles. There’s less fatigue at the end of sessions (unless you’ve really gone to town) and overall acceleration and speed is much greater than with other tarmac sweepers we’ve used. Not that there are loads of events but if you were racing then the Braap Stik definitely gives users an advantage – so much that skaters utilising this product may be getting an unfair advantage. With more land paddle racing comps possibly cropping up (if rumours are to be believed) the question remains: should this style of paddle and rider be given a handicap?

For general land sweeping, however, you can’t knock the Braap Stik. It’s a beast – literally. With so much power on tap it’s easy to get into a steady rhythm and flow. Those wanting to ‘dance’ a little can wind up sleds generating plenty of forward thrust to perform moves – way more than your standard land paddle.

Sliders and ramp addicts may struggle slightly with the Braap Stik. It’s not really a machine for this type of skating. We tried a few tail releases and everything just feels out of kilter – there’s nothing to actually lean on when getting lose. Park rats will find the Braap Stik tends to snag on coping and not really plant correctly during vert moves. We’re sure a bit of practice will see these hurdles overcome though.

All in the Braap Stik is a complete revelation when it comes to sheer land paddling power. Having set the correct shaft length (important!) riders can generate serious amounts of oomph without too much effort. Zenxten Inc’s Braap Stik revs up as soon as you plant its rubberised end on the tarmac. Drawing through strokes the spring is primed to set you peeling off at a rate of knots. It’s a great piece of kit for going zoom and manufactured to a high spec. Light weight and super nice to wield Braap Stik’s land paddle is an eye catching, potentially revolutionary and awesome for any skater looking to cover distance and get involved in the performance side of the sport.