We were asked by Tez, editor of SUPM, for our thoughts on how outrigger canoe (OC) and SUP complement each other. Being completely new at the OC, this is our take on it:

Andrea:
One demo of a Woo Feline Outrigger Canoe (OC) and I was hooked on this paddle sport. Like SUP, I had a huge smile when paddling this sleek canoe. I’m not alone in this one test and instant love of OC. My SUP, OC friend and training partner Sarah took delivery of her OC the same day as me and we have had a blast learning how to paddle them, in particular entering our (not quite) Paddle Round Jersey race in August.

I have been asked if I have switched sports and the answer is definitely no! These two sports go hand in hand, they are both paddle sports and whatever I do when training on the SUP – the training crosses over to the OC. As a Naish rider (a brand that I love and if Naish made OCs it would be awesome but they don’t – yet), I dedicate my time to training in the gym and on the water on my Naish Maliko and Javelin and it’s great.

I feel it’s two for one training as SUP helps me progress with the OC and vice versa. I find the OC a little less taxing on the body, so when I want an easy session but still want to feel like I have worked hard and of course have a little bit of fun (particularly if it’s a bit choppy), then the OC is my first choice. I love variety, and it keeps being on the water interesting. Go on, try a new watersport, you may just love it.

Quote from Samantha Rutt: “I was lucky enough to be introduced to OC1/6 quite early in my SUP journey and it’s the perfect cross training for it. Not only are you out on the ocean learning to read the swell, waves and conditions but you are doing it from a different view point which massively helps your understanding of the ocean. The paddle SUP stroke is very similar, not quite the same but a beautiful compliment to the ‘S’ stroke. “I’m able to train my heart rate zones the same as SUP but can cover a greater distance as it’s a whole lot faster!”

Sarah:
A chance meeting in Fuerteventura with one of the best stand up paddlers of our time, Sonni Honscheid, whom we had watched gliding huge swells in the bay on her OC, led two months later to taking on a pretty big paddling challenge.

The surf trip in Fuerte led to a try out in the OC by my SUP buddy Andrea, who immediately felt a connection with the OC and encouraged by her, I had the opportunity to trial an OC1 at the Royal Canoe Club on the Thames. It probably took me about five minutes to decide that I needed this craft in my life. We decided to order our OCs from the French outrigger manufacturer Woo and the model we chose was the Feline.

Slightly shorter than the traditional outrigger, it might be slightly slower on the glide, but come the bumps – that’s where it would perform!

Fast forward a month and despite the very sad death of Guy Ringrave, the founder of Woo, the company delivered our precious craft to us in the UK. Guy’s family are determined to continue the company that he set up ten years ago and we are now proud to be part of the Woo family.

Having paddled a SUP for seven years but given up racing due to a lower back injury, I was looking forward to how the OC might look after my body. Before going anywhere near the water, Andrea and I invested in a land-based lesson with someone who knows plenty about the OC. Pete Holliday took us both through safety and initial technique and after a couple of hours I can safely say that I was pretty spooked – don’t be fooled – OC is much more dangerous than SUP and if you are on your early journey, I would encourage you to seek out this information too.

Thank goodness we immediately had the chance to get on our canoes after the lesson and head out for some paddling to settle the nerves. I have to say, I have used every one of Pete’s tips and tricks and they have been invaluable and in the long run have given me a huge amount of confidence on the water.

The OC is a very light craft and even though it is over 15-foot long, it’s pretty easy to pick up once you know how. It’s delicate too, so needs careful looking after but I can put it on and off the van on my own (unless there is a gale blowing).

The first difference you notice between OC and SUP is the glide! These canoes are made to fly through the water – the shape of the hull gives that away.

Rudder
There is a rudder on the OC and for me personally that has taken a huge amount of pressure off my lower back. If I am paddling a side wind/chop for 5km I can paddle on both sides of the OC and use the rudder as a directional and balancing tool.

The paddle stroke is similar but not exactly the same but, in some ways, feels so much easier. You move quickly through the water and that in itself is one of the dangers. It’s quite easy to suddenly find yourself 2-3km out to sea without realizing it!

Connection
I have also learned so much more about the ocean. You feel more connected to it because you are almost sitting in it and when the swell is there you are ‘within’ the sea – sometimes quite literally! Learning all about the ‘huli’, how to capsize and recover, is a vital part of your learning – we dedicate time to this in full paddle kit and all waters, so that we know it CAN be done when actually needed.

With a full two litres of water in your hydration pack and wearing your buoyancy aid, it’s not as easy as you think. I think the kite and wind surfers down at Hayling, when it was perfect conditions for them recently, must have thought we were mad just going in and then to be throwing ourselves out of the OC!

The other thing I have learned very quickly is that the outrigger is made for the sea. No more flat water paddling for me, I shall save that for my SUP. It comes alive on the sea and you can get on the ocean in much tougher conditions too. Did I mention the glide and the bumps – being out on the sandbar at Hayling and catching those waves has given me such a thrill and learning when and where to come off those waves will stand me in good stead for some proper downwinding. 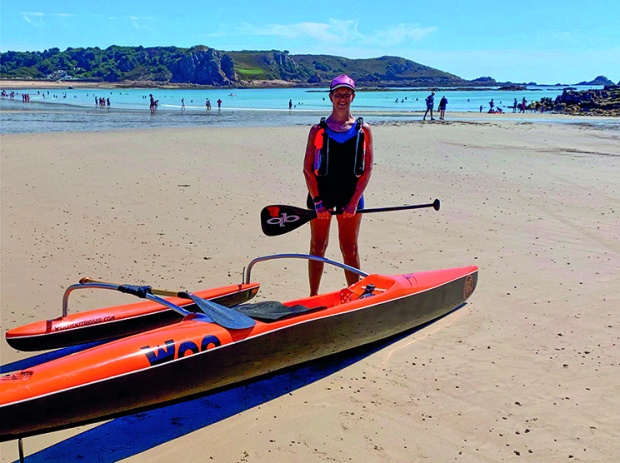 Quote from Pete Holliday: “For me Outrigger adds so much to the experience of paddling full stop. In its raw form it is the birth place of paddle sports. The second I sat in an outrigger for the first time it just felt ‘right’. You have an amazing connection with the ocean (your hands are in it and you’re sat low and amongst it). It helps with technique/stroke development, as you remove the standing balance issues of SUP. It’s more balanced and powerful, but all the fundamentals of paddling cross over to SUP too. It’s also way more accessible and versatile as you can paddle upwind into 20+ knots and then come flying back downwind. This versatility means more water time, which in terms means improvements in paddling, fitness and more fun.”

History
I also love the history of the OC which makes me feel more connected to my craft. There are many traditions and ceremonies which are steeped in history.

Many paddlers from the UK and around the world have either come from an OC background or have now discovered it as a great cross-training exercise or just for pure fun on the ocean. There are traditional clubs in the UK as well as some newer, more pioneering ones – I can’t thank the guys from the Bournemouth Outrigger Canoe Club (BOCC) for their help and advice recently and am very much looking forward to going out with the crew on the OC6.

Back to the “two months down the line” and having spent many an hour on the ocean with Andrea we headed over to Jersey at the end of August for the Round Island Challenge – an endurance event of some 33 miles in what can be pretty fierce conditions. This year was no exception and conditions were so tough that the organizers had a plan B and C situation. 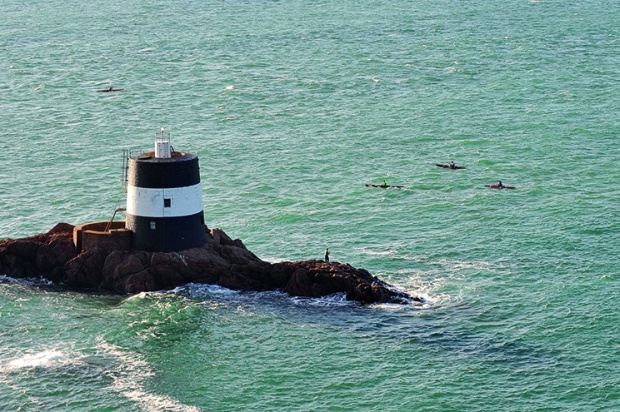 Nearly 30km of paddling was achieved in a two-stage challenge and the first 12km were in some of the toughest conditions I have paddled on the ocean. Tim Rowe from Jersey guided us round a gnarly headland with huge rip and standing waves which was both scary and exhilarating. An adventure never to forget. I would never have attempted an endurance event on my SUP but look forward to many more hours spent on my new favourite craft, the Outrigger Canoe.

I also entered the 14-mile Round Hayling Island Challenge in mid-September and was first lady across the line for the OC1s, though it was a small fleet – just Rhiannon Stiling and me but as they say, “In it…”

Such early days with the OC and so much to learn but my body is thanking me for it – I also believe I will be a better stand up paddler on the ocean due to the skills I am learning on the OC and on getting back on my SUP after may hours on the OC? Yes, I still love it! My competitive spirit and training have been reignited and I am excited to stretch myself once again. If you see me out and about on the water and want to have a go on the OC, just ask!

Thanks
Thanks to Sam and Pete who have contributed to this article with a few sentences on how they feel OC and SUP are linked. Check out a great article previously in SUPM by people with far more experience than us – you can find it online here: https://standuppaddlemag.co.uk/sup-and-outrigger-canoeing/